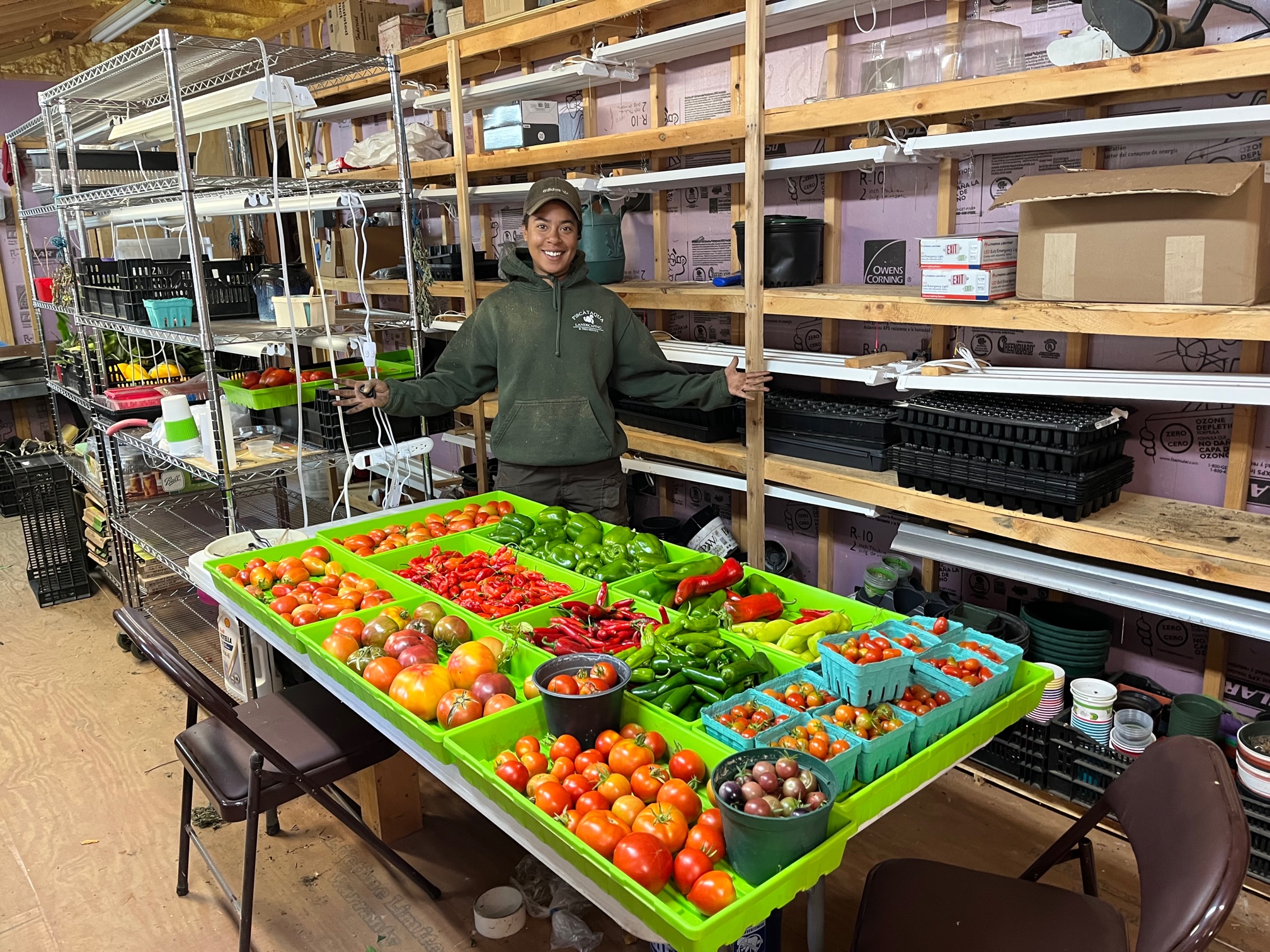 With gratitude to Kelsy Townsend, who helped us bring in the harvest

My first-ever sermon, delivered to the Kensington Congregational Church

Reverend Jeff MacDonald took a hands-off approach to my participation in this service; in all honesty, he has no idea what I’m planning to say…and that’s what I call faith!  All kidding aside, I appreciate the invitation, and the trust of this church.

I come from artists, entrepreneurs, rebels and deeply spiritual people. Two of my siblings became pastors – one Methodist, the other Lutheran. The seven of us were raised in the Catholic church, but I became an evangelical Christian as a teenager. That was my first act of rebellion.  My second was to reject what I learned through those formative experiences, as I developed a fundamental desire to NOT tell people what to believe or how to live their lives.  As a result, I haven’t spent much time in church since I was 21 years old, and that’s a long time!  But I am a part of this wonderful town, and feel honored to be able to share a few words about our experience cultivating food, and community, at Crows’ Feat Farm.

As you know, the Bible is replete with references to farming and nature.  Jesus often used agriculture as a metaphor to get his message across, probably because most people were involved in farming, in one fashion or another, at that time.  His disciples asked him: “Why do you speak in parables?” I think it’s because parables (what we now call metaphors) are powerful – they are easy to understand and to remember.  So easy to remember that I had a hard time choosing the best ones for the message I want to convey on this Harvest Sunday, 40 or 50 years after I first heard them.  Psalm 126 speaks of bringing in the sheaves. There’s the miracle of loaves and fishes, and the admonition that it’s better to teach a man how to fish than give him one.  Jesus called his disciples Fishers of Men.  As you can see, fish are very popular in the Bible!

And in New England.  Alas, we don’t have many fish at Crows’ Feat Farm, although one of our farmers knows how to fish, and has been bringing in the catch, literally and metaphorically. That said, most of our farming happens down on the ground.  We are committed to growing practices that nourish the soil, and that means not tilling the land.  That means working with our hands – indeed our whole bodies.  We raise garden beds, and feed them from year to year. One, two or three years of leaving the soil alone produces wonderful results – without relying on fertilizers, herbicides or pesticides.  Just look at the bountiful produce brought here today from the church’s giving garden.  We are so honored to be able to support the hard work and generosity of Kensington’s Congregational gardeners, under the leadership of the Two Susans – Armstrong and Bascom.  This produce is not mainly from Crows’ Feat Farm – it comes from all the extraordinary gifts of our community, for our community.

The theme of my remarks today is accountability.  I think we all have a sense of what that word means – but I checked Websters to make sure I was clear (and accountable!) to the message I’m delivering today.  The dictionary definition is the state of being answerable; responsible for the fulfilment of obligations; liability to account for one’s conduct, to meet commitments or suffer consequences.  In other words, there’s no “dog ate my homework” excuse.

Crows’ Feat is a cooperative farm.  That means we cooperate with one another. We rely almost entirely on the hard work of volunteers.  We are surrounded and supported by an amazing group of dedicated people who believe in our mission of cultivating community through the growing of food.  Many of our volunteers are with us today.

When Pete and I first conceived of a cooperative farm – and then tried to describe the concept to others – we encountered confusion bordering on incredulity.  How would we incentivize farmers?  What could possibly motivate others without a profit motive?  And, most of all:  How would we hold our people accountable?

It’s a reasonable question, given the society we live in today. As Jesus said, man cannot live by bread alone; he needs a place to live, gas for the car (or tractor!) and a good internet connection.  We’re not in it to lose money…at least not forever!  We are aiming to build a solid foundation – materially, organizationally and financially – so that a group of younger people can eventually assume responsibility for this cooperative, and run it sustainably after we’re gone.

So back to the question:  where is the accountability?  It’s a question I’ve thought a great deal about over the past few years.  We’ve gathered many perspectives in figuring out the right model for this farm.  We haven’t landed yet, but I think a fundamental principle is intrinsic motivation.  External rewards – whether they be money, social obligation (sometimes known as “virtue signaling”) and even the benefits of friendship – can only get you so far when it comes to clearing snow off the hoop house, tending the chickens at 5 in the morning, or weeding, which is a pain in the butt, however you look at it.  There has to be intrinsic motivation, which creates its own sense of accountability.

That all sounds really nice, but I’m not gonna lie – relying on volunteers (including myself!) has been nerve-racking at times.  Farming is an all-consuming endeavor.  Seeds need to be started early.  Plants need to be put into the ground when it’s not too cold or too hot – and kept watered until they are established.  You can’t leave food on the vine too long or it will spoil – or bolt.  And that’s exactly what you’re gonna want to do when you see the weeds growing out of control, seemingly overnight!

Jesus laid it all out there in the Parable of the Sower, which we heard today.  You’ve got to get a lot of things right to get any harvest at all – and in this part of the world, you get only one crack at it each year.  That’s why accountability is so important.  It’s not enough just to show up for a few hours, pat yourself on the back and hope for the best.  You have to commit.

I’m not talking only about the farming part; that’s just the beginning.  Bringing food to people is what matters.  That means making sure we have enough to fulfil commitments to our farm share participants, and to the local farmers’ market, while having enough to serve at our community dinners, to feed our volunteers, and to support the food pantry.  We grew twice as much food this year as we did last year – and five times as much as the year before – but were never quite sure we’d have enough.  Actually, I’m sure we DON’T have enough.  We’re aiming to double our harvest next year, by the grace of God and with the support of this community.

In the book of John, chapter 15, Jesus speaks of pruning vines to produce more and better fruit.  He’s certainly right about that – we definitely need to do more pruning in our orchard – it’s suffering from neglect.  That said, we have been doing a lot of self-pruning, you might say.  That’s what intrinsic motivation produces: a sense of internal accountability that is self-selecting.  People who care show up – and the more people who show up, the more they care, for each other and for this farm.  A thresher is not needed to separate the wheat from the chaff.

There’s a concept in gardening known as air-pruning.  That’s when a plant’s roots are not constrained by a physical barrier such as a pot – but instead are bounded by the soil in which they grow.  Once the roots reach the edge of the soil (the air, in other words), the plant stops and pauses in its growth. The roots don’t get tangled up (pot bound) and therefore dysfunctional.  They wait until a better medium is available to support their growth.  You could say that our community members are air-pruning themselves.  We offer opportunities to grow, and/or to pause, and not get all tangled up in ourselves.

We could have accomplished nothing without our volunteers.  But they’re busy people with their own lives and challenges.  Schedules go awry, routinely.  People get tired and frustrated, understandably.  Coordination is essential, ongoing and difficult.  With so much sharing going on, it can be hard to find the right tool when you need it.  And yet we aim to do so much!  We could easily be mistaken for the dragon in a Chinese New Year parade – when the tail goes wandering off in another direction.  As my dear husband likes to say: “Shit happens, does it not?”

I’ve taken to joking that the unpredictability of nature has met its match in the unreliability of schedules at our farm.  This is only our second year, after all.  We’re toddlers!  We roll with the punches and pray for the best.

But you know what?  It is coming together, somehow, based on the intrinsic motivation – the shared sense of accountability – of the Crows’ Feat Farm team.  Every time it seemed like disaster was about to strike, someone stepped up, with a helping hand, a hug, a smile, a lighthearted joke, words of wisdom and warmth.  Volunteers, customers, community members expressing appreciation for what we are trying to do, and faith that it will all work out.  Because it has to.  Because failure is not an option for our society.

That same day Jesus went out of the house and sat by the lake. Such large crowds gathered around him that he got into a boat and sat in it, while all the people stood on the shore. Then he told them many things in parables, saying: “A farmer went out to sow his seed.  As he was scattering the seed, some fell along the path, and the birds came and ate it up. Some fell on rocky places, where it did not have much soil. It sprang up quickly, because the soil was shallow. But when the sun came up, the plants were scorched, and they withered because they had no root. Other seed fell among thorns, which grew up and choked the plants. Still other seed fell on good soil, where it produced a crop—a hundred, sixty or thirty times what was sown. Whoever has ears, let them hear.  The disciples came to him and asked, “Why do you speak to the people in parables?”

“I am the true vine, and my Father is the gardener. He cuts off every branch in me that bears no fruit,  while every branch that does bear fruit he prunes, so that it will be even more fruitful. You are already clean because of the word I have spoken to you.  Remain in me, as I also remain in you.  No branch can bear fruit by itself; it must remain in the vine. Neither can you bear fruit unless you remain in me…

…As the Father has loved me, so have I loved you. My command is this: Love each other as I have loved you. Greater love has no one than this: to lay down one’s life for one’s friends.  You are my friends if you do what I command.  I no longer call you servants, because a servant does not know his master’s business. Instead, I have called you friends, for everything that I learned from my Father I have made known to you. You did not choose me, but I chose you and appointed you so that you might go and bear fruit—fruit that will last—and so that whatever you ask in my name the Father will give you. This is my command:  Love each other.

We Get by With a Lot of Help from Our Friends