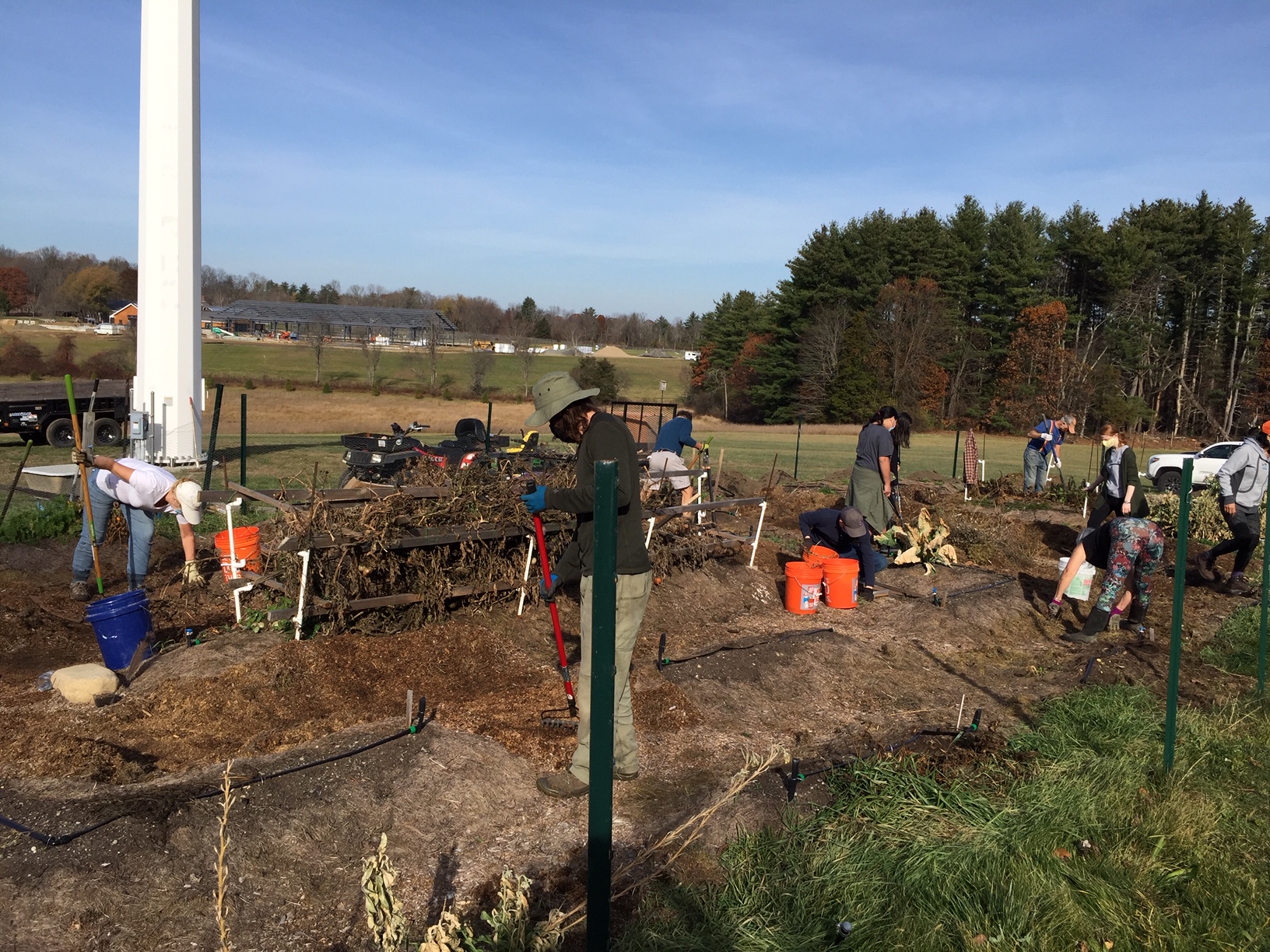 Last weekend the Crows’ Feat “farm team” got together for a working party to put our permaculture beds to rest for the winter.  Fourteen of us gathered to (a) lay down cardboard and wood chips for weed prevention on the garden paths, (b) remove plant debris from the beds while leaving the roots intact in the soil, (c) layering manure & compost on the beds; (d) covering all with a layer of cut grass and leaves as a blanket against winter cold & wind.

It was a gorgeous day, perfect for community and conviviality, as we celebrated our accomplishments and savored a fabulous lunch prepared by Anna with the farm’s produce:  Frittata with carrots & sweet potatoes; a vegetable soup of kale, pumpkin & white beans; and red-onion foccia with goat cheese.

Scott commemorated the occasion with a ceremony in which we expressed our appreciation for the land, and for what we learned from the day.  As Ryan Busby observed, many hands made light work.  As Harry Truman said, it’s amazing what you can accomplish when you do not care who gets the credit.  This is the spirit of community that has guided America for generations, and which is reflected in the tangible beauty of the house at 178 Drinkwater Rd:

Kensington’s long ridges of high ground offered fine dwelling spots for the hardy young people in Hampton and Hampton Falls, who must move out from crowded homes and build their own homes.  These hills would quickly dry out and be ready for spring planting of rye, buckwheat, beans, corn, pumpkins and turnips the first year after the trees were cut.

Parties were organized to come here from Hampton and Hampton Falls, to help the prospective young pioneer clear his land and get ready for his new home.  Tradition survives of how these parties with their oxen came here, bringing as food their rough bread and large kettles of bean porridge and corned meats.  They worked for three or four days, sleeping in the open around the blazing fire at night, and when they returned, the trees were cut, a house was framed, perhaps boarded in as well, great logs snaked into piles for burning, and next spring the young husband with his own oxen, a gift or payment for work from his father, and the young wife with her cow, the gift from her father, would come here and start life. Soon a rough road from house to house over the hills would be made, and from that on back to the old plantation of Hampton and extending on to the nearest neighbors at Kingston.  These roads followed the three ridges: Red Oak, Stumpfield and Horse-Hill.

Hampton families sent the major part of the settlers here between 1702 and 1732, though a few Salisbury and Exeter families contributed a few and one man came down from Kingston.  The list of Families whose young men and maidens came here with zeal to conquer nature, build their own homes, self-reliant at an early age, like young birds pushed from their nest…is as follows:  Jonathan Prescott, Nathaniel Prescott and Deacon John Prescott, and William Brown, were the earliest of the settlers who made permanent homes here.”

— The History of Kensington, New Hampshire, By Roland D. Sawyer, 1946.

276 years ago, Jonathan Prescott, with the help of his friends and family, built the house that sits atop this ridge.  It is well made—with enormous granite boulders setting its foundation, hewn oak beams that support the roof and walls, and hand-forged nails holding it all together. Jonathan returned the favor of community – paying it back and forward – by becoming one of Kensington’s first Selectmen.

We are living the legacy of our pioneers here at Crows’ Feat Farm, thanks to this wonderful community!