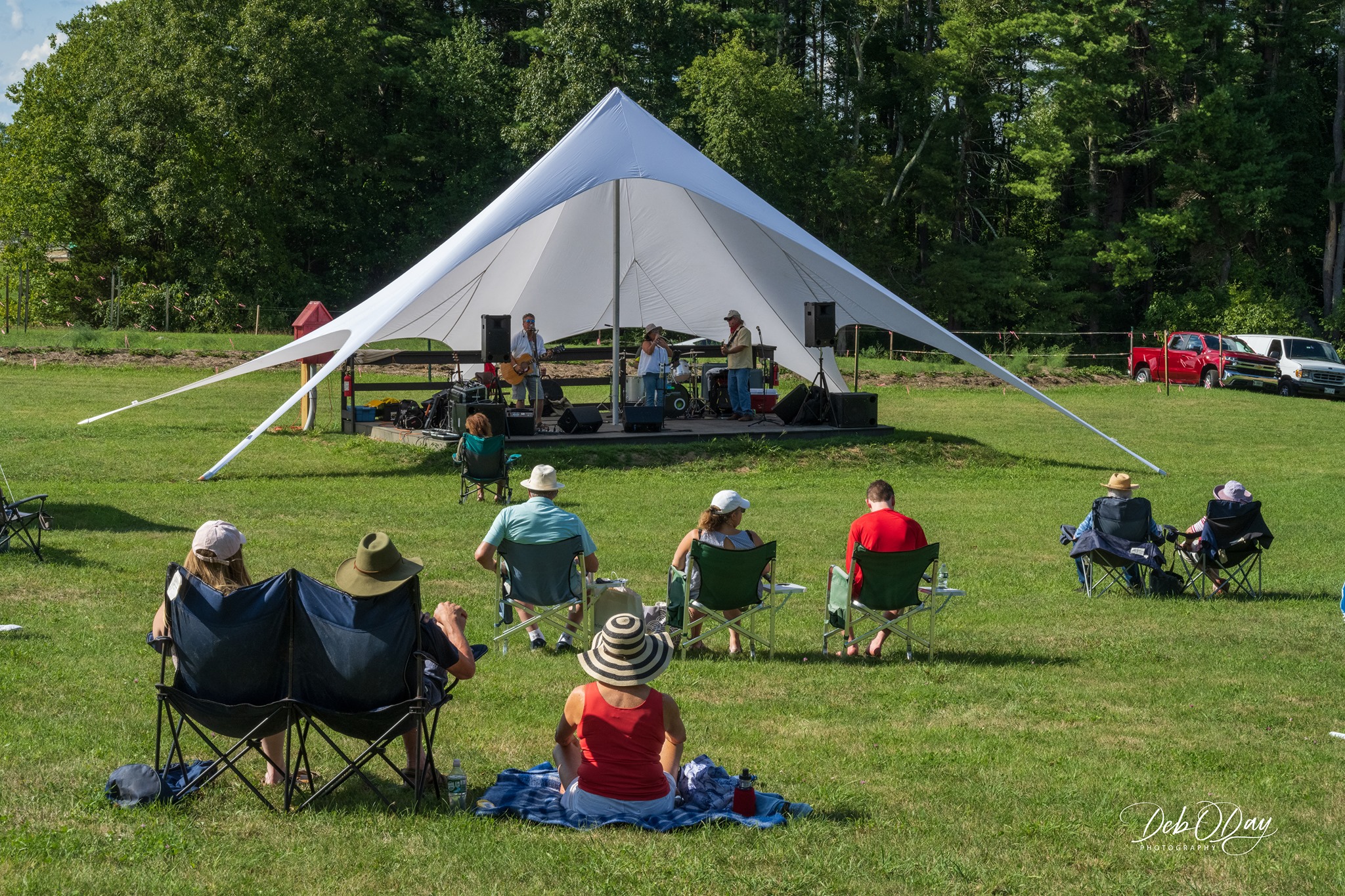 For those of you who don’t know the backstory, the Crows’ Feat Farm summer concert series began with a missed summer vacation.  Our family’s Acadia sojourn was canceled due to the Maine governor’s June decision to quarantine out-of-towners. That was a bummer, but it started us thinking about what we could do with the time and money we would have spent there—something that would make this difficult summer better, especially for others experiencing disruptions and
disappointments far greater than ours.  That’s how we came up with the idea for these concerts, and called on our musician friends to help us plan it out.  Many, many thanks go to Ben Baldwin, Brewster Porcella and Scott Richardson.

The preparations were made in a hurry—barely than 3 weeks passed from concept to the opening bars of Soggy Po’ Boys amazing debut concert.  It would not have been possible without the exceptional support we received from the musicians in the series, from Kensington’s Selectmen, from the town’s Fire and Police Chiefs, from family, friends and neighbors who helped with the construction, emergency planning, concert setup/breakdown and ticketing—and, of course, to all of you.  To be honest, we really didn’t know what we were doing!  All we knew is that we wanted to create something wonderful FOR our community, and by relying ON our community, something wonderful happened!  This was not a commercial operation.  Thanks to the help of family, friends and neighbors, Pete and were able to cover the operational costs of staging these concerts, so that all proceeds could go to the musicians.  I’m delighted to let you know that we were able to raise $12,000 for the fifty artists who performed here at the farm.  Almost all of the attendees came from the Seacoast, with a third from right here in Kensington & Exeter.  At our first concert, I described
this as our Field of Dreams:  If we build it, will they come?  Yes, they did come…for 760 visits filled with music, fun, sun, dancing, chatting, foot-tapping and reminders that we truly ARE a community.

We have been donating almost all of our 2020 farm produce to the Society of St Vincent de Paul in Exeter.  That’s because we don’t have a distribution network established yet, and because of the severity of the food insecurity people are experiencing right now.  Fortunately, the permaculture methods we have been practicing here at Crows’ Feat produced enormous yields from a relatively small acreage—hundred and hundreds of pounds of zucchini, squash, tomatoes, cucumbers, beets, spinach, kale, swiss chard, potatoes, corn…and many others*.  Even so, Molly Zirillo, the Executive Director of the Society, tells me that the community’s need for their support is greater than ever, even as food donations are slowing down.  Too many people are suffering, anxious and hungry now, through no fault or failing of their own.  And so, although the bulk of our harvest is now complete, we’ve committed supporting the Society through the winter months, in any way that we can.

With that in mind, we’re asking our friends to do the same, by making a donation in support of the Society, and our community.  Those who donate $50 or more will receive a free Crows’ Feat Farm  t-shirt—hot off the screen printing presses!

Now I know how to write my “back to school” report on how we spent our summer vacation.  My stepdad always used to say, “A stranger is just a friend you haven’t met yet.”  I never knew how many friends we had until this summer—and I like to think we fostered some new friendships among  many others, who are no longer strangers to one another.

And that’s a beautiful thing!